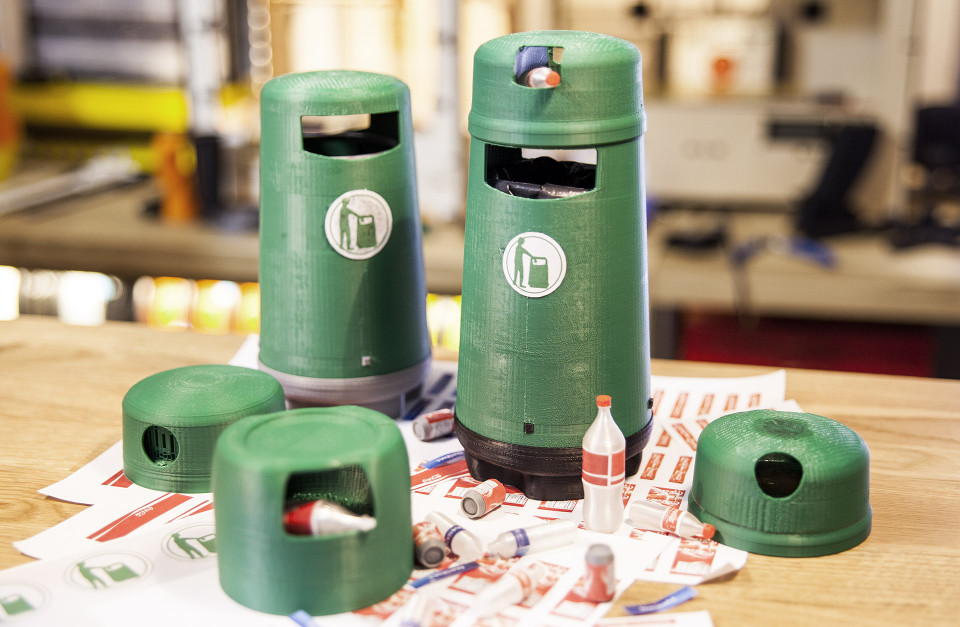 November 2013 I got in contact with Mathias Hauge to 3d-print a prototype of his bottle collector. The idea behind this concept is to have people put their empty bottles/cans in a separate container on top of the existing Topsy garbage can, which is placed throughout Norway. This way people in need dont have to sort through the garbage looking for empty bottles. This is a lot more hygenical, and it helps to remove a lot of volume from the trash.

Hauge already had a 3d-model, but after some deliberation he opted to have me redesign the concept for him. Although I loved the idea, I thought the model supplied was a little “underdesigned”. It didnt follow any of the lines from the existing Topsy garbage can, and it looked too big and bulky, in my opinion. Having pictures and measurements I first 3d-modelled the garbagecan to scale before making my initial 3d-sketch of the bottle collector. Following the lines and curvature of the garbagecan, the form and shape of Turvy almost drew itself… which was supposed to be a natural extension of the existing design.

We agreed on the basis form and considered options for the bottle openings and whether the Turvy would look best with, or without a “lip”. I decided a scale of 1:6 would be the most feasible to 3d-print, considering the time and other elements of the project. After also printing a collection of 1:6 bottles we could physically check to see how many bottles would actually fit inside the bottle collector. For extra realism I added a black plastic bag inside (visible through the garbage entry hole), and an accurate emblem. The whole project was printed at 0,15 mm layer height @ 75mm/s speed and 35% infill. The Topsy and Turvy was printed in ABS on my Replicator Original, and the bottles/cans in PLA on an Ultimaker 1.